By Peter Coe Verbica,
President of the California Congress of Republicans

There’s a popular show called “the Voice.”  Perhaps you’ve seen it.  Four judges sit in big swivel chairs with their backs to the singer.  Part of the fun is seeing their faces when they discover the shape, size and personality of the vocalist.  Often, the combination is unexpected.  At the 2019 California Republican Party Convention Prayer Breakfast, I experienced a similar surprise.  A Superhero arrived in Sacramento on February 24, 2019.  She was disguised in the form of a 5’5” high grandmother by the name of Jo Anne Madsen.

Now, Superheroes are known to have various powers.  Some can leap tall buildings with a single bound; others can bend steel bars, talk to fish, swing through cityscapes from spiderwebs or outpace a speeding bullet.  Impressive skills, but for the survivors of the Paradise “Camp Fire,” who witnessed a roaring fire ravage their historic, Gold Rush town and were numb with shock, a rescuer would have to bring something even more powerful.  Under such formidable circumstances, Jo Anne did just that.  As President of the Chico Relief Society, she and her organized teammates marshalled the most powerful super power of all.  They brought hope. 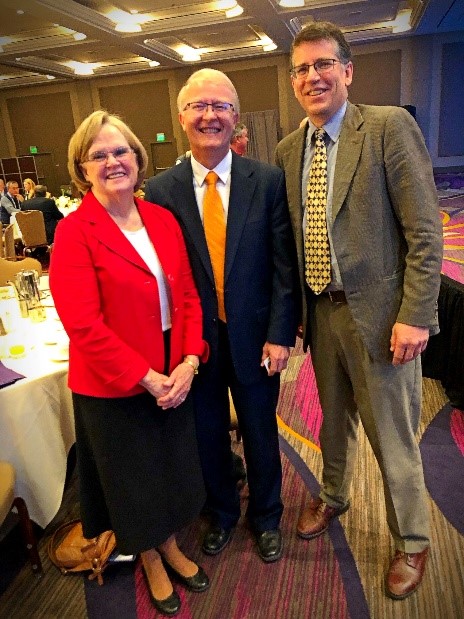 Jo Anne’s personal background helped her be the right person when help was needed.  Her family had experienced its own personal tragedy with the previous Carr Fire.  Loved ones lost their home and came to live with Jo Anne.  She learned first-hand that for victims of a fire, concentration is difficult; even the simplest of decisions can be confounding; short term memory skills degenerate temporarily.  Life becomes shrouded in fog.  There is a need to talk.  Even the simplest of tasks, such as going to the store can seem overwhelming.  Time is needed to heal.  As the athlete and writer, Vernon Law, explains, “Experience is a hard teacher because she gives the test first, the lesson afterward.”

All of us are familiar with a Superhero born on strange planet, and another raised by his English butler in an immense mansion.  Jo Anne’s background is less esoteric and exotic.  She grew up in Bountiful, UT.  Her dad worked as a salesman in a sporting goods store.  Her mom was a seamstress.  The family moved to Salt Lake City when Jo Anne was a Senior in high school.  She attended Brigham Young University where she studied food science and nutrition and met her future husband, Dale.  Later, she obtained a Master’s in Public Health from Walden University.  When I interviewed this Superhero, she mentioned not a single martial arts, marksmanship, or bomb-diffusing class.  Evident to me, however, was that she has mastered the art of service above self.  And, taking it further, for Jo Anne and her compatriots, being of service to others is being of service to God.

Though her Church life is of vital importance, Jo Anne and her colleagues at the Relief Society are eminently practical.  When determining how to be of help to the fire victims, of first order was to get a list of what people needed to do, including: 1. Post their names; 2. Get a Post Office box, so that they could receive mail; 3.  Change their address; 4.  Contact their insurance company; 5. Save their receipts; 6.  Proactively look for housing, using a variety of tools, including social media; 7.  Post any specific needs, such as clothing or bedding.  Other order of business included coordinated temporary housing, professional counselors, three meals a day, long-term assistance (such as utilizing the Bishop’s Storehouse with respect to milk and canned goods), coordinating with six local buses to help get children and teachers out of the fire area.  The Relief Society coordinated with CalFire and the police department who came to speak to the fire victims.  Adults were split into two groups: those whose homes were affected and those who homes weren’t.  Children were asked to draw something which scared them; something which made them sad; something that made them happy.  Many of the hand-drawn pictures included cars and houses on fire; comments on adults which were sad; moms crying.  Those whose homes didn’t burn wrestled with the guilt of why fate had spared them.  The Relief Society helped coordinate trailers full of supplies coming in; a local catering company provided a Thanksgiving dinner.  Phone calls, texts, emails and letters flooded in with people wanting to help.

So, much of what Jo Anne and her team have addressed has been tactical; how to deal with limited room to store things; providing a camp fire giving tree where people could explain what they needed; hundreds found their needs met by others via social media; CHP helped collect toys; while 2,000-3,000 were expected, 14,000 toys were given out, such was the outpouring of care.  A quilting area was established and 500 hand-made quilts were handed out; a Santa’s toy shop was established, as well as a gift-wrapping area; books, clothing and toiletry items were organized.  To help with morale, fifteen hairstylists from Chico, and some who came up from Los Angeles,  provided over 75 haircuts.  “Home Starter Kits” were created for the new households; items such as dishes, mixing bowls, and utensils were itemized on an on-line retailer’s registry.

Recipients of the goodwill have experienced tears of gratitude and expressed their appreciation, but there is still work to be done; there have been food drives and suit/clothing drives; hundreds of beds, dressers, chairs, tables and couches have been provided.  Most importantly, there is still a need for permanent households for those who were displaced.  With respect to temporary housing, such as trailers, there is the question of where to place them.  For many of the survivors of the fire, one-on-one counseling and ministry provides important solace.  Paradise was a community of many elderly people; one off-duty bus driver helped transport senior citizens who were stranded.  Children pitched in as well, with bake sales and fund drives, such as “Pennies for Paradise.”  Jo Anne Madsen has had thousands of deliveries made to her home as the point person for the relief effort, becoming friends with the various delivery and postal employees.

As Jo Anne explains, she and her teammates employ charity in action, and share an unwavering belief that “charity never faileth.”  Jo Anne would be the first to acknowledge that many organizations such as the Red Cross, local fire, medical, police, churches and other non-profits, have been instrumental in making a difference for the families of Paradise.  There are other Superheroes making important contributions, but I am particularly inspired by the one disguised as a 5’5” high grandmother.

When Roger Kaspar, Ph.D, Scientist and Entrepreneur (pictured with Ms. Madsen and her husband, Dale Madsen, DDS) learned about Ms. Madsen’s speaking engagement about relief efforts for the victims of the Paradise fire, he left his Santa Cruz home at 5:30 am to attend the 8 am 2019 CAGOP Prayer Breakfast.  For those wanting to know more about how they can help those still in need, sleep in and utilize your computer or smart phone instead.  Write Ms. Madsen at jsmaden@aol.com.  She and her amazing friends at the Relief Society continue to organize “Home Starter Kits.” These are comprised of items which people need to start up their home, so they don’t have to worry about purchasing items.  Once you have obtained a list from the Relief Society of which items are needed, she and her team will give you instructions on where to have them sent.