A recall election seeking to remove California Gov. Gavin Newsom (D) will take place on September 14, 2021.[1] The recall election will present voters with two questions. The first will ask whether Newsom should be recalled from the office of governor. The second will ask who should succeed Newsom if he is recalled. A majority vote is required on the first question for the governor to be recalled. The candidate with the most votes on the second question would win the election, no majority required.[2]

Recall supporters said Newsom mishandled the state’s response to the coronavirus pandemic, did not do enough to address the state’s homelessness rate, and supported sanctuary city policies and water rationing.[4] In a March 2021 response, Newsom called the effort a “Republican recall — backed by the RNC, anti-mask and anti-vax extremists, and pro-Trump forces who want to overturn the last election and have opposed much of what we have done to fight the pandemic.”[5]

Organizers of the recall campaign submitted 2.1 million signatures by the March 17 filing deadline.[6] The secretary of state’s office found 1,719,943 signatures were valid – more than the 1,495,970 necessary to trigger a recall election. Voters who signed the petition had until June 8 to request removal from the petition. Forty-three signatures were removed, leaving 1,719,900 valid signatures on the petitions.

Newsom was elected as governor in 2018 with 61.9% of the vote. Orrin Heatlie began this recall campaign on June 10, 2020. It was the fifth of six recall petitions filed against Newsom since 2019. To read more about how this recall went from the official petition to the ballot, click here.

Since 1911, there have been 55 attempts to recall a California governor. The only successful recall campaign was in 2003 when voters recalled then-Gov. Gray Davis (D). Arnold Schwarzenegger (R) was elected as Davis’ replacement.[7][8] In that election, 135 candidates ran and the winner received 48.6% of the vote.

Taxes hurt.  Taxes hurt bad.  Even socialist Bernie Sanders does not want to pay taxes.  Bernie earned $1.1 million dollars in 2016 and 2017, but when he was asked if he paid extra taxes to support his socialist agenda, he deflected the question and rationalized that other rich people do not pay extra taxes. Typical response from big government legislators – “Do as I say, not as I do.”

I understand taxes are necessary to pay the debts and provide for the national defense and general welfare of the United States of America, the greatest country on Earth.  But the expansion of “general welfare” has been blown out of control, especially in our beloved state of California.  Irresponsible tax-generating legislators have found creative ways to hide their methods of taxation on us.

In California, we are taxed, surcharged, assessed, and fined from a myriad of sources, many of which we are unaware. Besides the highest income tax in the country at 13.3%, California charges a 1% lumber tax on qualified wood products, a paint fee of 75 cents per gallon, a Tire Fee when purchasing each new tire as well as a disposal fee when you return the old tire, an automotive battery fee, an Electronic Waste Recycling fee on purchases of laptops, televisions, and computer monitors, and even a $10.50 mattress recycling fee.  Los Angeles county sales tax comes in around 9 %.  My cellphone bill collected seven different state taxes and one L A county tax.  My property tax bill had the 1% general tax levy but added another $1400 in annual taxes for community college, schools, sanitation district, sewer, vector control, flood control and many more itemized fees. Check out your bills, you may be surprised.

California also has extreme taxes on tobacco products, alcoholic beverages, and cannabis.  The tax for one pack of cigarettes is $2.87 with other tobacco products being taxed at 56% of the wholesale cost.  Cannabis has 15% excise tax rate of the average market price plus 60% markup for arm length transactions.  The California Liquor Tax is $3.30 per gallon.  Of course, there are licensing fees for all persons or businesses making sales of these products.

Harder to find fees include:

These fees add an additional 38.9 cents per gallon for a total of $1.185 per gallon in taxes and fees. Congratulations, California has the highest gas prices in the country.

Vehicle registration also increased dramatically with all the revenue promised to improve state and local roadways.  But in stepped Governor Newsom to sign Executive Order N-19-19 which directed the state to spend money on projects “to help reverse the trend of increased fuel consumption and reduce greenhouse gas emissions associated with the transportation sector.” In response, the California Department of Transportation proposed delaying funding for three highway widening projects in San Luis Obispo County and the Central Valley, instead setting aside $61 million in SB 1 funds “for priority rail projects and other priorities aligned with the Executive Order.”

President Biden has outlined a two-part economic plan that will cost between $3 trillion and $4 trillion over the course of a decade.  The president says the first is the “American Jobs Plan” and the second is the “American Families Plan.” Some considerations in the plan include $621 billion in transportation infrastructure, $400 billion for expanding access to quality, affordable home- or community-based care for elderly and people with disabilities, expanding health insurance coverage, extending the child tax benefit, building 500,000 electric vehicle chargers, and numerous mentions of investments in technology addressing climate change.  But President Biden assures us that our taxes will not increase because these plans will be funded by raising the corporate tax rate to 28%, an increase of 7%. This massive infrastructure proposal is a vehicle to advance far-left wing policies.

We cannot afford the policies of these tax grabbing elected officials.  Our children cannot afford these costs.  Our national debt is greater than $27 trillion, and America’s federal debt is set to exceed the size of the entire U.S. economy this year for only the second time since the end of World War II. The cost of living in California is already too high and forcing many of our young people to move out of state where they can buy a home and live a middle-class lifestyle. Big government is not efficient and is extremely expensive. Help the California Congress of Republicans elect more fiscally responsible legislators. We cannot afford any more bigger spenders. 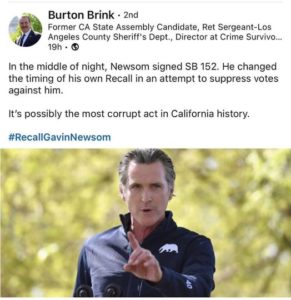