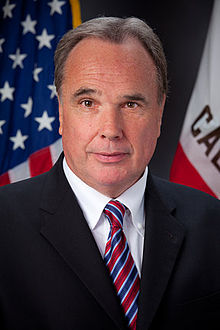 In the coming weeks, the legislature is set to take a final vote on Senate Bill 54 by Senate President pro Tem Kevin de Leon (D-Los Angeles). Should the measure pass, it would make California a “sanctuary state,” shielding dangerous criminals from deportation and further erode the Rule of Law.

While its approval in the Assembly is uncertain at this point, it is critical to note that if this measure becomes law, it would weaken public safety in our state, putting additional and unneeded pressure on local law enforcement.

Consider where California is already. In 2011, Sacramento’s Democratic majority, led by the governor, pushed through Assembly Bill 109, a law that shifted over 30,000 felons out of the state’s prison system into local jails. As a result, sheriffs have been forced to release criminals into our neighborhoods – individuals who have committed crimes such as involuntary manslaughter, elder abuse, battery against a first responder, grand theft, and a host of other offenses.

Three years later, Proposition 47, the misleadingly titled “Safe Neighborhoods and Schools Act,” endorsed by prominent Democrats, classified property crimes such as gun theft, shoplifting, and receiving stolen property as misdemeanors no matter how many times a criminal commits them, just as long as the value of the stolen items is less than $950. In the first two years after its passage, 13,500 inmates were let out into our neighborhoods.

When asked about the impact of Proposition 47, conversations with local law enforcement officials directly confirm that felons are adapting their methods to evade penalties. In one instance, a criminal offender was in and out of the police station at least 41 times, unable to be held in lock-up.

Further, under the Governor’s Proposition 57, criminals most reasonable people would consider dangerous or violent are eligible for early release. These offenders commit acts such as felony battery, felony assault with a deadly weapon, solicitation of murder and the list goes on. State officials have estimated that another 9,500 felons will be released.

Rather than being empowered to keep dangerous criminals out of our communities, law enforcement’s hands are increasingly being tied. They are able to do little more than engage in a system of catch and release, with few consequences for those who are apprehended and convicted.

By making California a “sanctuary state,” SB 54 will safeguard dangerous illegal immigrant criminals from deportation, preventing law enforcement from cooperating with federal officials, even in extreme circumstances when they determine it necessary to do so.

When you think about just two of these – child abuse and sex trafficking of young girls – it becomes clear that the Democrats at the capitol are waging a war against all of us, but especially against women and vulnerable children, the very groups they claim to protect.

With all of these facts in mind, it is unconscionable that these lawmakers would put more strains on our already overburdened public safety system. However, that is exactly what will happen with the passage of SB 54.

In opposing the measure, the California State Sheriffs’ Association wrote, “The breakdown of local, state, and federal partnerships that will occur under this bill will prevent violent criminals from being kept off our streets.”

I refuse to believe that most Californians accept and agree with these bad laws. Polls conducted by UC Berkeley have found that respondents do not think local authorities should be able to ignore a federal request to hold a detained criminal who is in the country illegally.

For years, Democratic leaders have taken California in a perilous direction. Our state has some of the highest taxes and is frequently ranked the worst place to do business by CEOs from around the nation. They promote big government policies ranking the state above citizens. Tax dollars are not used as promised, resulting in struggling schools and the highest poverty rate in the nation.

Now, under SB 54, Sacramento Democrats are crossing a line, gambling with the lives of California families and choosing to support policies that have hurt countless victims while protecting felons over law-abiding citizens. Their views and actions no longer represent the majority of ordinary people.

They are breaking our state, putting Californians at risk by prioritizing the freedom of felons over the justice crime victims and their families deserve – and the majority party will have to own it.