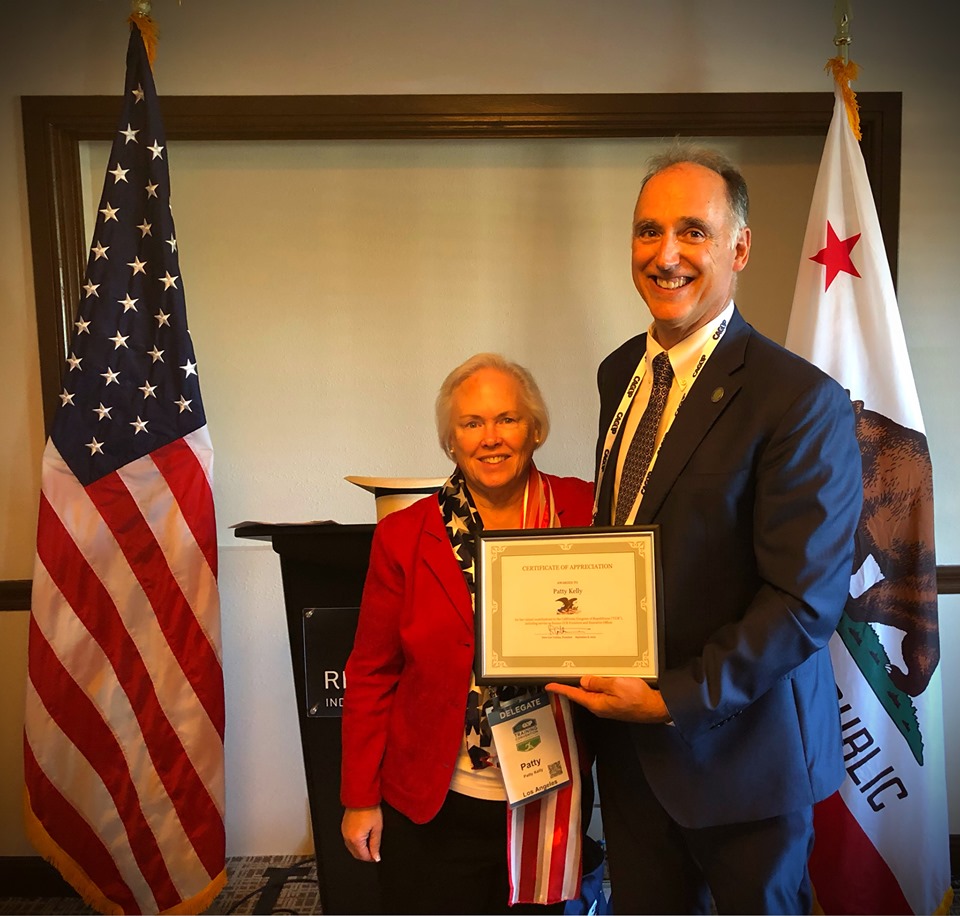 Right off the bat, forgive me for bragging, but the California Congress of Republicans (“CCR”) is chock full of superstars up and down the State.  Gather ‘round and listen up.

Every Chapter president, Regional Vice President, Executive Board member and sponsor is worthy of accolades.  Patty Kelly deserves such an honor; she has years of experience helping get Republicans into office and running grassroots organizations, such as CCR and one of its most active chapters, the Santa Clarita Valley Congress of Republicans, and serving as a delegate to the CAGOP.  Through her hands-on, active volunteerism, Patty Kelly has been ensuring that the California Republican Party’s grass roots organizations just get better and better.

My last in-person visit with Patty and her husband, RJ, was at a Rat Pack-style event in Indian Well put on by the inclusive Log Cabin Republicans, the California Congress of Republicans and California Young Republicans Federated.  What a stellar example of teamwork!  I caught up with her on the phone after our recent CCR Board meeting.  Despite the Tick Fire raging in East Canyon Country near Patty’s home, she was cool, calm and collected.  The fire had already burned down seven houses and 4,500 acres.  Thankfully, Patty and her husband had working cell service and a trusty radio to keep apprised of any potential danger.

A Star is Born

Perhaps Patty’s willingness to get things done is due to her remarkable background.  She grew up in “Motor City” Detroit (which once shone brightly as an economic beacon); her father operated a grocery store there but was perceptive and knew that the tide was turning.  So, in the spirit of the pioneers who preceded him, he headed out to California, a state once renowned for phenomenal public schools, affordable housing and plentiful jobs.  (Through the 1940s and up until 1970, California median home prices were nearly on par with the rest of the Country’s.[i])  Patty and her four siblings were raised in the San Fernando Valley, and she attended James Monroe High School in Sepulveda, home to the Vikings.

While some high school students get involved in football, others join the chess club, or debate, Patty had other demands.  She, her sister and three brothers performed as a group, playing musical instruments and being showcased in performances; they also starred in many television commercials, on the radio and live performances.  How cool is that?  Her father’s company, Murphy Music Industries, manufactured amps and electric guitars, including the “Murph Squire,” “Westerner,” heart-shaped “Satellite,” the “Baby Satellite,” “Murph Califone,” and “Mini Murph,” which was played by heartthrob Davie Jones and the Monkeys at the 1966 Teen Fair at Hollywood’s Palladium[ii] and other rock groups of the time.

Patty went on to Nashville, TN for college, getting a BBA in Music/Business Concentration while attending what is now Belmont University; she went on to get her Juris Doctorate at the University of Tennessee College of Law in Knoxville.  The Tennessee Volunteers have won an impressive “23 national team championships (including sixteen NCAA championships).”[iii]  (No wonder mascot “Smokey,” the blue tick hound appears so happy!)  Patty was introduced into politics while working at the Office of Legal Services for the Tennessee State Legislature, where bills are drafted.  Once back in California, after working at a law firm which specialized in personal injury and workers’ compensation cases, she went to work for California State Senator Wm. J. “Pete”  Knight who served as a test pilot and in the USAF; he held the record for piloting the fastest fixed wing aircraft and was recognized as an honorary astronaut due to his high-altitude flights.  Patty then worked for State Senator George Runner (now a member of the California State Board of Equalization).  Following in her dad’s entrepreneurial footsteps, Patty started her own consulting business, MurphyBryantKelly, Inc. and ran several local political campaigns.  She also helped State Senator Tom McClintock (R-CA 4th District) wind down his office as a State Senator when he was termed out.  Afterwards, Patty rolled up her shirtsleeves, getting back to work with the Central Committee and as a CRP Delegate.  She also worked hard to help Steve Knight, Pete Knight’s son, get elected to the US House of Representatives (25th Congressional District) when Buck McKeon retired.

While Patty is very involved in supporting Republican causes, family comes first.  She is married to CCR Board Treasurer, RJ Kelly and together, they own Int’l Tax Network, Inc.  She loves spending time with her daughter, Corinna, and son-in-law Tim, and helping with her three grandchildren, Coby, Cade and Abby.  They also spend time with RJ’s two boys, Morgan and Justin who are in the film industry.  Patty still has a her mother and brother who live near her in Santa Clarita, a sister who lives in Clovis, but other siblings have moved; her oldest brother lives in Texas which boasts no state income tax, and another brother lives near Boise, ID (a city which scores high in safety and jobs[iv]).

After Patty was widowed, she met her husband RJ; they were introduced by a high school chum of Patty’s.  The Kellys’ first date was on Valentine’s Day and they’ve been enjoying life’s journey together ever since.  They enjoy traveling, including a trip to Belfast, Ireland to see RJ’s son, Morgan Kelly work his computer animation magic on sets for the wildly popular television series, “Game of Thrones.”  The Kellys also enjoy Maui and Oahu, and visit Hawaii often.   Another favored destination is the Mexican Riviera, including Cancun, as well as going to North Carolina to see their grandchildren and spending time with the family.

As mentioned, Patty has been a Republican dynamo, Patty helped guide the helm of the California Congress of Republicans as its President from 2014-2015, and has been a leader of one of the organizations most dynamic chapters, the Santa Clarita Valley Congress of Republicans, where she has served as President multiple times.  Cream, as they say, rises to the top.  This CCR chapter is famous for its October Barbecue, fun Fourth of July patriot floats and their hospitable meetings at Margarita’s Mexican Grill on the first Thursday of the month.  Whether the issue is voting for a new CAGOP administration, approving a new Party platform, or adding a new chartered organization, Patty takes time out of her busy schedule to lend a hand and vote.  As a member of the CCR Executive Board, along with her husband, RJ, both lend a shoulder to ensure that our statewide, grassroots organization will continue to thrive.  Hats off to Patty!