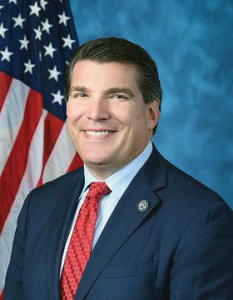 U.S. Congressman Jay Obernolte proudly represents California’s 8th District in the U.S. House of Representatives. A video game developer and business owner, Rep. Obernolte is dedicated to ensuring the High Desert, Eastern Sierras, and Inland Empire have a strong voice fighting for their interests in Congress.

Rep. Obernolte serves on the committees on Natural Resources, Budget, and Science, Space, and Technology and in a leadership role as the freshman class representative to the House Republican Policy Committee. He is dedicated to using these positions to defend the vast public lands that make up California’s 8th District, control federal spending, and tackle major issues such as technology policy reform and digital privacy.

Previously, Rep. Obernolte served as a member of the California State Legislature representing the state’s 33rd Assembly District and as Mayor of the City of Big Bear Lake. He has also served on the boards of the Big Bear Lake Fire Protection District, the Mojave Desert and Mountain Integrated Waste Authority, the Mountain Regional Transit Authority, the League of California Cities Desert-Mountain Division, and the Big Bear City Airport District.  In these positions he worked across partisan lines to pass legislation helping California’s hardworking families by lowering taxes, stopping government encroachment into privacy and personal liberties, and upholding law and order. He has also been a strong advocate for local veterans, defending funding for the Barstow Veterans Home and helping ensure California veterans receive the care and respect their service has earned.

Rep. Obernolte lives in Big Bear Lake with his wife, Heather. They have two sons, Hale and Troy. In addition to owning a videogame development studio, Rep. Obernolte is a certified flight instructor and a teacher of martial arts. He holds a B.S. in Engineering and Applied Science from the California Institute of Technology (Caltech), an M.S. in Artificial Intelligence from the University of California, Los Angeles (UCLA), and a Doctorate in Public Administration from California Baptist University (CBU).